I Will Return to Honduras…

I Will Return to Honduras

Because I Have Seen How Your Support Changes Lives 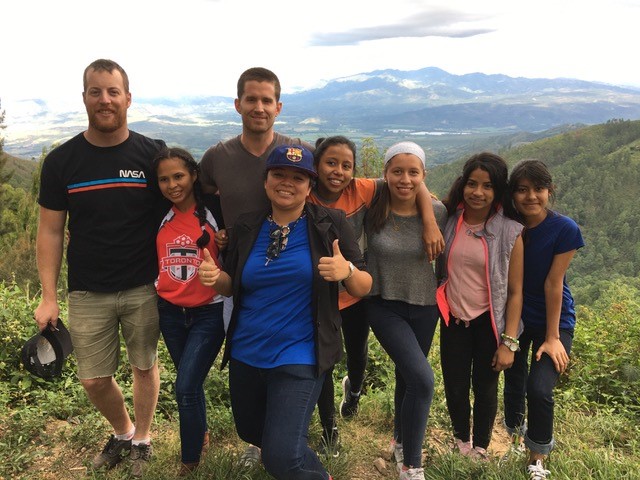 I first heard about Friends of Honduran Children brigades when in high school after a few of my pals took part in a trip, returning with stories of adventure and connection. Travel had always been a major interest and hobby of mine, but it was not until the fall of 2017, when a friend set to embark on another visit invited me along, that I experienced one for myself.

I have been to Honduras three times now, and with each trip the friendships and camaraderie are automatic. Though each trip begins with a blend of old and new faces, by the return home everyone feels like family. Leading up to a trip, we get together to plan agendas, brainstorm projects and excursions, and tackle the immense task of sorting and packing the thousands of pounds of donated goods. I am no stranger to maneuvering through airports, but all experience is for naught when you are doing it with two dozen hockey bags stuffed to within 2 ounces – sometimes under, but often over – the maximum allowable luggage weight. The looks we receive from airport staff and other travelers always reinforce that what we are doing is unique.

There is no simple way to capture the entire experience once arriving. The nature of Honduras as a country, combined with environmental unpredictability, and ever-emerging opportunities/obstacles force us to be flexible and add a beautiful layer of spontaneity and adventure to every trip. Some groups go down as building brigades, and others as medical brigades, but our group has been (accurately) nicknamed the “Spoil the Children Brigade”. We provide much needed supplies, fund important projects across several communities, and lend a hand wherever needed. Above all else however, the kids are always the number one priority. To give a few examples, in my trips, we have; thrown Halloween and Christmas parties, bused the 150-kid group to a rented out movie theatre two hours away for a day away from the orphanage (sometimes for the first time ever), planned soccer tournaments, rented pools and provided swimming lessons, organized on-site movie and activity nights to give the staff a rare break , brought in DJs for outdoor dance parties, and taken some older kids on shopping trips to market towns for a taste of what the world is like beyond the walls of the orphanage. The most important thing we do for the kids though, in my opinion, is simply to give them our time and attention. The kids at Nuevo Paraiso are seemingly the happiest folks you could ever meet, despite most of them experiencing more tragedy and heartbreak before the age of twelve than most people can imagine in a lifetime. The simple act of spending time, and being present with these kids; whether it is playing soccer, making crafts or just chatting, can be a powerful experience and one I would hope serves as a reminder that someone cares and is there for them.

‘The kids at Nuevo Paraiso are seemingly the happiest folks you could ever meet, despite most of them experiencing more tragedy and heartbreak before the age of twelve than most people can imagine in a lifetime’

I currently work as a freelance artist, but with a bit of a twist. In addition to my normal workload, I take on small commissioned pieces (tattoo designs, logos, branding etc.) in exchange for donations of any amount. I periodically organize other art sales and fundraising projects with all proceeds being donated, and 50% of sales from my shop always go towards the present Honduran initiative. For example, through the generous support of a lot of friends, family and strangers all around the world, I was able to organize a fundraiser to throw a Christmas party from afar – in place of the usual event we would have held during our cancelled December 2020 trip. We organized an extravagant Christmas dinner for all of the kids and staff of Nuevo Paraiso, while also being able to top up a fund covering the operating costs for a school in a rural coffee growing village in the Honduran mountains that has remained close to our hearts for four years. Though not as satisfying as my usual tradition of putting on full fleece Santa garb in the 40 degree summer heat to sing, dance and deliver gifts, it was great to receive photos of the kids enjoying themselves, and knowing that we were still thinking of them.

(To be continued in Part 2)